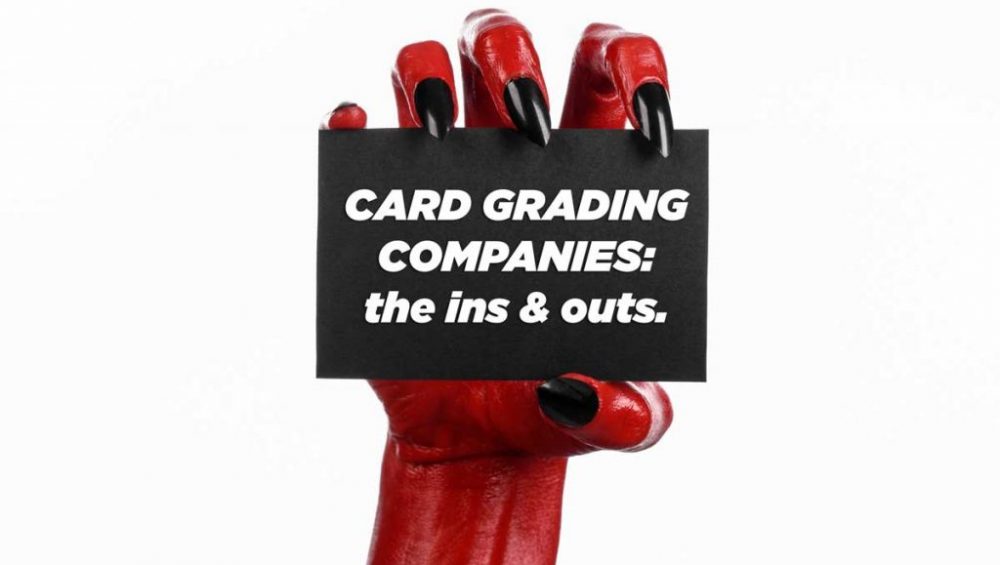 Card Grading Companies – The Ins and Outs of Grading

Let’s dive into card grading companies and your options out there. I’ll admit I had taken a long hiatus from collecting cards and came back into the game several years ago to a much different game- the grading game. How to find the right card grading company and how are you making that final decision to send your beloved collectibles in?

So where to begin? You have a card that you think is valuable and want to get it graded like the piece of art you believe it is. First things, first. Take a look at our guide on how to prep your cards for grading, and also how to determine if your card is worth grading.

A quick google search shows so many card grading companies; how do you decide on a company? PSA and Beckett (BGS) are considered the top tier of grading companies. But should they be? What about some of the smaller companies? With so many options like PSA, BGS, HGA, GMA, CSG and Canadian companies like KSA, MNT and Hall of Fame Grading, there are no shortages of options.

When considering a grading company, I like to look at 4 cornerstones that help guide my decision on choosing a company.

Customer Service – If I’m sending you an item of significant value, I want to be able to contact you. Do you answer the phone? Do you reply to emails? Do you interact with customers on social media? One of the most frustrating things when dealing with some grading companies is their lack of transparency. I’ve sent questions to some of the big graders regarding my submissions and received stock responses and a general lack of info. Recently, I had a positive experience with a small company, Hall of Fame grading in Toronto. Their owner helped my track some missing cards and kept me abreast of when they had been graded and when they’d be returned to me. Sometimes the small guy is better!

Affordable – Sometimes we have cards that we’d like grading, but grading several cards at once can break the bank. PSA and BGC are both notorious for their high prices and sliding scale of higher value cards being more expensive to grade, which is solely for shipping insurance purposes. If I can get a nice quality slab that doesn’t break the bank, I always listen. It’s how some smaller companies have been able to get a foothold in the competitive grading market, like GMA, which we will discuss later.

Accuracy – One of the main reasons why people gravitate towards some of the bigger companies is their perceived accuracy. BGS is notorious for their tough (and fair grading), as is PSA. But can’t smaller companies also provide accurate grades? In fact, due to overwhelming volume, some of the bigger companies have seen less accuracy in the last 18 months. Instagram is littered with cards with soft corners receiving mint 10 grades from some of the big guys, while other expensive cards have incorrect labels or fingerprints inside the slab. To come back to Hall of Fame grading, the first time I used them, I received grades of 6, 8, 8.5 and 9.5. It would have been easy to give my higher grades, and make me a fan of theirs- but they didn’t, which actually pleased me more- they were accurate! While a company like GMA has affordable pricing and decent return times, they accuracy is quite poor

And finally, the big one- Return Times! With an overwhelming interest in the card grading game, return times have swelled for the big guys. I like grading cards, but my interest in grading cards and spending my hard-earned cash to wait for over a year for my cards to come back to me. I wonder how many people have wondered if their valuable cards have just disappeared? Some companies are seeing 4-6 month wait times for their cards to register as even being received! Who wants to go through that?

Pros and Cons of Big Grading Companies vs. Smaller Graders

In conclusion, give the little guys a chance. I like to send in cards that are not super-valuable to test out the 4 cornerstones I mentioned earlier. I am more than happy to give my money to a company that can consistently provide good customer service with affordability, accurate grading and fast turnaround times. You should, too!