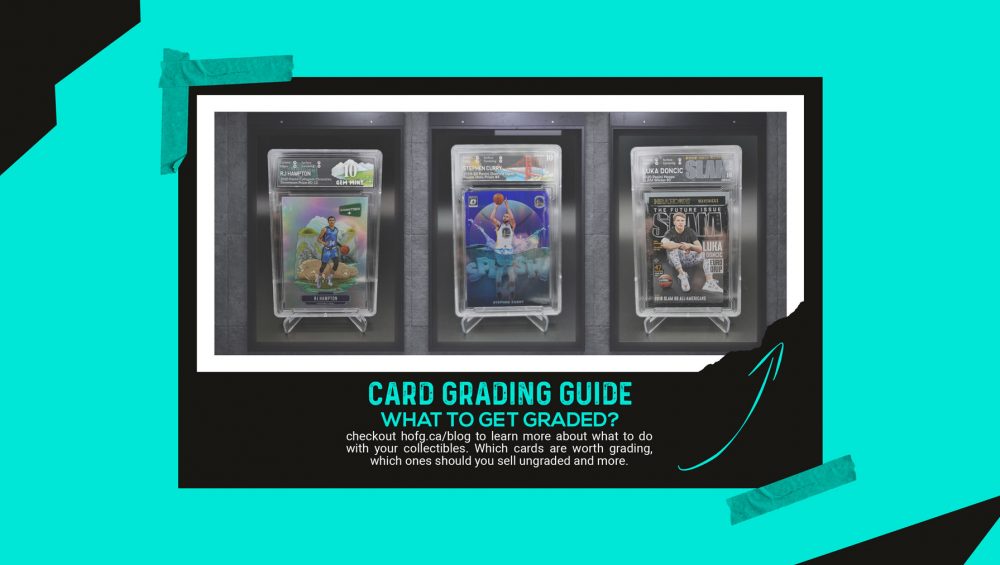 What to get graded? A Card Grading Guide of what is worth grading and what isn’t.

We’ll go in details in this card grading guide to help collectors understand what’s good to send in for grading and what should be kept for yourself or sold raw (ungraded). One of the biggest issues facing grading companies is sheer volume. As the hobby becomes more and more lucrative, grading obviously adds great value to your cards, resulting in large submissions of cards.

The key to submitting cards is asking yourself the question- is this card worth grading? What would a 10, 9, 8, etc. create in additional value to the owner? A quick PSA 8 check on eBay shows a significant number of commons that people have submitted for grading. The question remains, why?

So what should you get graded then? A Card Grading Guide!

A general rule of thumb is, get cards graded that you think will grade well (more on that later)

Vintage cards, prior to 1980- due to scarcity and sheer age, these cards will be harder to find in good condition due to age and lower quality control. Again, avoid commons and stick to hall of famers, superstars, and GOATs, like this Guy Lafleur card.

You should grade superstars numbered and rare insert cards.

Generic inserts found in regular packs should be avoided, as should non-superstar players. Older numbered cards have high numbers (eg. /1000) and should be avoided as well. I own a Freddie Freeman 1/1 Donruss Baseball card. I like Freddie, and he’s a solid player, but it’s not worth getting graded. Obviously something like this Mahomes RC /75 is worth getting graded.

You should grade rookie cards of superstars, GOATs and other legends.

Get your Tiger Woods RC graded, your Lebron James, your Wayne Gretzky, maybe your Zion and maybe even your LaMelo Ball. I’m torn on LaMelo; he’s wildly popular, but what is his upside? This LaMelo card likely won’t grade well, as it has a soft corner. I’ll save my money on grading on this one. This Haaland card is worth grading. His upside is massive, and the Topps Now card has a limited run. Card is in good shape after inspection.

Positions- certainly positions are more valuable than others- in football, QB cards, with RBs and WRs being a lower tier. Don’t bother getting defensive players graded unless they’re surefire hall of famers or GOATs. Baseball, position players are the highest tier, with pitchers being lower. In basketball, big men are a lower tier, and hockey cards, we’re looking for high scoring forwards over defencemen and goalies.

What to avoid getting graded:

Cards from the Junk Wax era (1988-1994ish) with one exception- GOATs- Michael Jordan cards, Shaq rookies and other GOATs like Barry Sanders’ RC and Derek Jeter’s RC existed in the junk wax era- get them graded as these cards are quite old and were notorious for having low quality centering and production. This Barry Sanders card is grade-worthy, as it’s in good condition and Barry Sanders is arguably the best Running Back of all-time. Same goes for this Allen Iverson Rookie card.

Numbered cards of common players, or high numbered cards. I love Frank Gore, and he’s a hall of famer, but an end of career, New York Jets, Score card numbered to /225 isn’t worth grading

Commons and regular inserts- what is the value in getting your Brook Lopez Bucks card or Alex Kerfoot Leafs card graded? If you’re truly passionate about those players, put them in a one touch and save your money with regards to grading

Speculative cards- the flood of Cam Reddish, James Wiseman and Sekou Doumbouya on eBay were people who automatically submitted any RC they could get their hands on. Will those cards pop? Possibly, but why not wait until they’ve established themselves before hurrying to get them graded? I’m sure grading companies are getting overwhelmed with Mac Jones, Trevor Lawrence, Justin Fields, Zack Wilson and Trey Lance cards. History tells us a couple of these guys will bust. Wait it out!

I’m bullish on Justin Fields, but at this point (August, 2021), he hasn’t won the starting job for the Bears. I’ll hold off on grading until he pops.

Cards that have any damage to them- a friend recently submitted a Gretzky RC to PSA, that looked to be in good condition (maybe a 6 or 7), but was sent back ungraded due to a small pen mark on the back. Cards that have shaved edges or corners, or cards that have been in screwdown card holders for a long time may be considered altered and ungradable.

Keep in mind that a lot of the older cards have edges that were cut with wires, therefore your card might look like it’s terribly damaged (edge grading) but it won’t rank low due to it. Cards from Topps and O-Pee-Chee (along with other brands) up to late 80s were cut with wires. That’s usually why you see all those Gretzky, Patrick Roy, Mario Lemieux, Bobby Orr and so on being a bit rough around the edges. Don’t worry so much about that, they’ll grade well!

Card Art- while card art has taken off on instagram, and the idea of owning a 1/1 of your favourite player or legend is cool, these cards cannot be submitted for grading.

Thanks for reading! Any questions about our grading prices, turnaround time and more can be directed to our support team via the Contact Page.

3 thoughts on “What to get graded? A Card Grading Guide of what is worth grading and what isn’t.”