•    Features a diverse 230-card Base Set, including rookie redemption cards for new-skating 2021-22 rookies, and an expanded parallel lineup! The Base Set breaks down as follows (subject to change):

Collect up to 12 non-auto/mem Base Set parallels, including nine #’d to 99 or less, and a wide range of autograph and/or memorabilia (including premium game-worn memorabilia) parallels! Look for a variety of memorabilia, including jersey swatches, patch swatches and fight straps.

The top six prospects in the Rookie Redemption program will be featured on a full array of auto, memorabilia and auto/memorabilia variation cards, highlighted by the prized Purple Foil Patch-Patch and Black Foil Patch-Tag autograph cards!

•    New! We’ve added some stellar new insert sets, highlighted by the Clear Cut Artifacts Rookies acetate set comprised of three subsets: 2021-22 Clear Cut Artifacts Rookies, 2020-21 Clear Cut Artifacts Rookie Update and 2005-06 Clear Cut Retro Artifacts Rookies! Additionally, keep an eye out for the all-new Net Gear, Storied Scripts and Signs of Success cards! Net Gear is a goalie-specific jersey insert featuring a mix of active stars and retired legends. Look for autograph versions #’d to 25. Storied Scripts is a hard-signed autograph set #’d to 25 and includes some of the greatest players in the history of the sport. The Signs of Success set – with Tier 1 cards #’d to 49 and Tier 2 cards #’d to 15 – features autographs from active stars and top rookies. Collectors will be chasing these incredible cards – all of which are Hobby Exclusive!

•    The popular Arena Artifacts insert is back! This year’s edition commemorates the historic Joe Louis Arena, home to the Detroit Red Wings from 1979-2017. As it was the home of some of the greatest teams in NHL history, Joe Louis Arena hosted the Stanley Cup Finals an impressive six times. Each card in this special set #’d to 79 features a legendary Red Wings player (who played in The Joe) alongside a piece of a seat relic from the vaunted arena.

•    The Top 12 Rookie Signatures insert returns, including 2020-21 updates. Keep an eye out for these really rare cards!

The Aurum Bounty Card Program returns with a 48-card set-within-a-set! Each card features the player etched out in Gold Light FX. 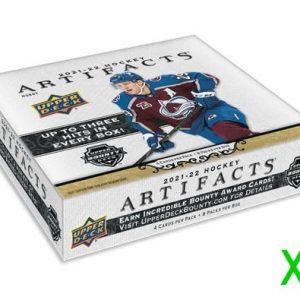